Over 2,300 years ago, in ancient times, a young prince named Alexander was born in a kingdom called Macedon (also known as Macedonia.)  He is known today as Alexander the Great.

While growing up, the young prince Alexander had many teachers, one of whom was Aristotle. Aristotle was born in a Greek city-state near the border of Macedonia. Artistotle's parents were great believers in education. When Aristotle was 17, his parents allowed him to move to Athens, a major city-state in ancient Greece, so that he could study with the famous scholar, Plato. Aristotle stayed in Athens for 20 years. When he finally came home, his dad got him a job in the royal court in nearby Macedonia as a tutor to the young prince Alexander.

Alexander had many tutors. They taught him the art of war. Artistotle taught him to admire and respect the Greek culture. Artistotle was only Alexander's tutor for 3 years, but he had an enormous affect on the young prince, so much so that Alexander soon convinced himself that his father, King Phillip II of Macedonia, was not his real father at all. Alexander chose to believe that he was really the son of the Greek god Zeus. That belief dictated a great many of Alexander's actions throughout his life.

When Alexander was 19 years old, his father (King Phillip II) was assassinated. Alexander took over as king of Macedonia in 336 BC. Alexander quickly pulled together all of Macedonia under his leadership. Then he finished the job King Phillip II had started, and united the Greeks, this time under Alexander's leadership. Combining an army of Macedonian warriors and Greek warriors, Alexander turned his attention to the massive Persian Empire. It was very clever of him to target Persia. The Greeks did not want to admit Alexander was their leader, and probably would have caused the young king many a headache. Only the Greeks hated Persia. Attacking Persia with a combined force of Macedonian and Greek warriors probably helped Alexander to maintain the control his father (King Phillip II) had established over the many Greek city-states. It took Alexander only three years to defeat the powerful Persian Empire.

By the time Alexander was 25 years old, against incredible odds, and in only six years, Alexander had become not only the king of Macedonia, but also the leader of the Greeks, overlord of Asia Minor, pharaoh of Egypt, and the great king of Persia.

"Over the next eight years, in his capacity as king, commander, politician, scholar and explorer, Alexander led his army a further 11,000 miles, founding over 70 cities and creating an empire that stretched across three continents, and covered around two million square miles. The entire area from Greece in the west, north to the Danube, and south into Egypt, and as far to the east as the Indian Punjab, was linked together in a vast international network of trade and commerce. This network was united by a common Greek language and culture." Alexander the Great, BBC.

Alexander's Empire in 323 BC, 13 years after his father died 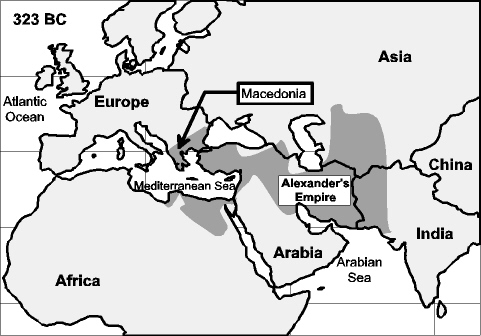 Part of his success is that Alexander truly believed he was the son of Zeus, king of all the Greek gods.

He probably would have kept going, perhaps all the way to China, but Alexander died young. He was only 32 (or possibly 33) years old when he died. There was talk at the time that he might have been murdered by his own men. That rumor could be true. Many soldiers had not seen their families for years and wanted to return to Greece and to Macedonia. They said so. That made Alexander angry, always a dangerous situation. That's how desperate his men were to go home. "After retreating to his tent to sulk for two days, Alexander emerged saying that the gods willed that he should return home. On the way home, when Alexander reached the coast at Pattala, he used ships to send many of the original soldiers of his army back to Greece and Macedonia. The others he marched through a desert to reach Babylon. There was little water. Many of his soldiers died during this desert crossing. Alexander survived the crossing, making it back to Babylon, the capital of his empire. In 323 BC, while in Babylon, Alexander got very sick with a fever and died." penfield.edu

Alexander had made no plans on what to do with his vast empire after his death. It did not seem to occur to him that he could actually die. Rumor has it that on his death bed, his generals asked who should take over? Alexander replied - the strongest. And died.

After his death, his empire disintegrated. Part of the reason was that Alexander's army never blended together. His Greek warriors and his Macedonian warriors never got along. "The ancient Macedonians regarded the ancient Greeks as neighbors, not as kinsmen. The Greeks treated the Macedonians as foreigners ("barbarians") whose native language was Macedonian, not Greek." History of Macedonia, Greek Conflict. Although Alexander loved the Greek culture, his Macedonian warriors were not as enthusiastic. But mostly, his army just wanted to go home. Alexander's three major generals could not keep them from doing that.  His top three generals did divide Alexander's empire into three big pieces. They did each rule their piece for decades, with pockets of success. In spite of their efforts, the Middle East, Egypt, and the many Greek city-states were soon once again independent.

PIECES OF THE PAST:  Keep in mind, we're talking about events and happenings and people who lived over 2,300 years ago. Historians are still putting pieces of the past together. There are written records. Some are romanticized, fictionalized, idealized - you get the idea. Historians try to put pieces of the past together accurately. It's not an easy job. There is still a great deal of work to do. But most scholars believe that Alexander was a real person and a military genius, who kept Greek culture alive and flourishing.

Absolutely fabulous - YouTube, Alexander the Great in original drawings with a narrator (Note to our students - You do not need to learn all these terms and cities, but this short video will give you a greater understanding of Alexander, how clever he was (and how dangerous!)

Alexander the Great - Was he really great?

What is the difference between a city-state and an empire? (pptx, ola 7th grade)

One question we get quite often is why didn't Alexander attack Rome?

Good question. Look at the map below. Rome was only one peninsula over to the west of the Greek city-states. This was the period of the Roman Republic. Most scholars believe that Alexander's focus was on first tightening his control of the Greek city-states, a process his father had started, then moving on to Persia, a known enemy. Conquering the Persian Empire took him three years. Since he was already headed east, he just kept going, towards India. (Note to our students: About 200 years after the death of Alexander, Rome did conquer the independent Greek city-states. At the time of Alexander the Great, Rome was not a threat to Alexander's empire.)

Yellow: Some of Alexander's empire
Red: The Roman Republic 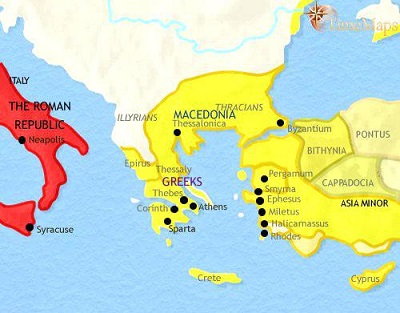