Geography had an enormous impact on the ancient Greek civilization. It led to the development of individual communities, rather than one country. In fact, Greece did not become a country until in modern times (in the 1800s.) Thousands of years ago, the geography of ancient Greece was divided into three regions - the coastline, the lowlands, and the mountains.

The Coastline: Saltwater and Harbors: Ancient Greece was made up of hundreds of city-states, grouped together at the southern end of a very large peninsula that jutted out into the Mediterranean Sea. (A peninsula is a piece of land surrounded by water on three sides.) Smaller peninsulas stuck out from the main Greek peninsula, forming a great deal of natural coastline and many natural harbors. There were hundreds of small islands nearby in the Ionian and Aegean Seas. The people of ancient Greece took advantage of all this saltwater and coastline and became outstanding fishermen and sailors. There was some farmland for crops, but the Greeks could always count on seafood and waterfowl to eat. Rivers could not be counted on for transportation because the rivers dried up in the summer and overflowed in the winter. Transportation and food relied very heavily on the sea. 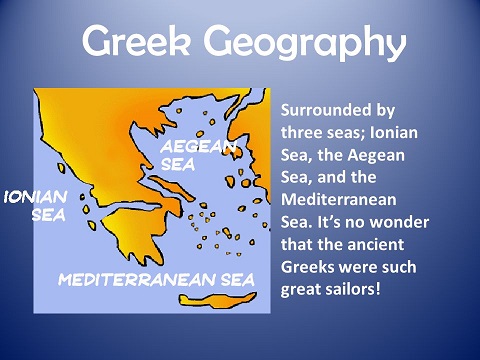 The Lowlands: Rocky and Uneven Soil, Climate and Farming:  Summers were hot and dry, and winter were mild and windy. Only about 20% of the land on the Greek peninsula could be farmed. The ancient Greek farmers grew crops that would survive in this environment - wheat, barley, olives, and grapes. The many hills and mountains provided shrubs to feed herds of cattle and sheep.  The early Greeks also depended heavily upon trade and imports with other regions around the Mediterranean. That's one reason the early Greeks tried to set up colonies in North Africa and in Asia. They wanted to control the import of grains and other foods.

The Mountains: Lots of Mountains and Fresh Water: The ancient Greeks needed a source of fresh water to settle down. Greece has lots of mountains. They are not huge mountains like the Alps. But they are big enough to provide two important things - a source of fresh water, running down the mountains in creeks and streams, and a system of natural defense barriers. The mountains made land travel very difficult and contributed to the formation of independent city-states.  Not many roads were built, because they would have to avoid the mountains and follow the long, meandering coastline. Besides, connect to what? Each city-state in ancient Greece was its own unit, with its own government and its own way of doing things. 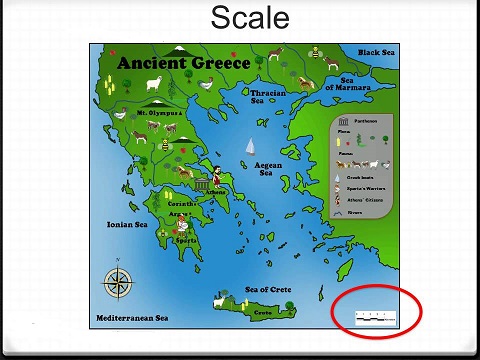 Maps of Ancient Greece for Kids and Teachers (Donn)

Useful Maps of Ancient Greece (both blank and with answers)

The Winged Monsters, story for kids

The Island of the Sirens, story for kids

The Water Rights, story for kids