How did Alexander the Great conquer the Greek city-states?

Good question. Ancient Macedonia was a powerful kingdom to the north of the ancient Greek city-states. Phillip II, king of Macedonia (Macedon), Alexander's father, created the League of Corinth, using the threat of another possible Persian invasion to encourage and justify a common peace between the Greek city-states and Macedonia. In times of war, they would team up to defend each other.

Macedonia created a document that all the Greek city-states were supposed to sign - a binding, legal document. It was very smart to use the name Corinth in the title of the agreement and the league. If Macedonia could get one of the powerful Greek city-states to sign, like Corinth, other smaller city-states would be more likely to follow. The city-state of Corinth was tired of hearing everyone talking about wonderful Athens. To be chosen over Athens, by name, blinded them to the terms of the contract. Macedonia assured the Greek city-states that anyone who joined would have a representative at meetings of the League. What they did not mention is that those representatives would not have a voice unless the Macedonians agreed with them.

There were many ground rules in this tricky document that sounded fair but that actually benefited only Macedonia. For example, if a Greek city-state did not follow the rules, Macedonia could, by the terms of this agreement, send their army in to crush them. Macedonia did not need to discuss this decision with other members of the league or look at options. Interestingly, Macedonia did not sign this document, so they were not subject to any of the rules they created.

Athens was not blind. They refused to join this League. Thebes refused. Sparta refused. Olympia refused. But the smaller Greek city-states were eager to sign. The Greeks loved deals. This certainly sounded like a good one. To many, the thought of having the massive Macedonian army on their side in times of war sounded absolutely terrific. The fear of a Persian invasion was a real one. And Macedon was huge! They were reassured that this was a good deal because the major Greek city-state of Corinth thought it was a good deal. Many Greek city-states signed.

(Macedon is pictured in orange below. Persia is in purple.
Each Greek city-state is a little dot in the yellow area.) 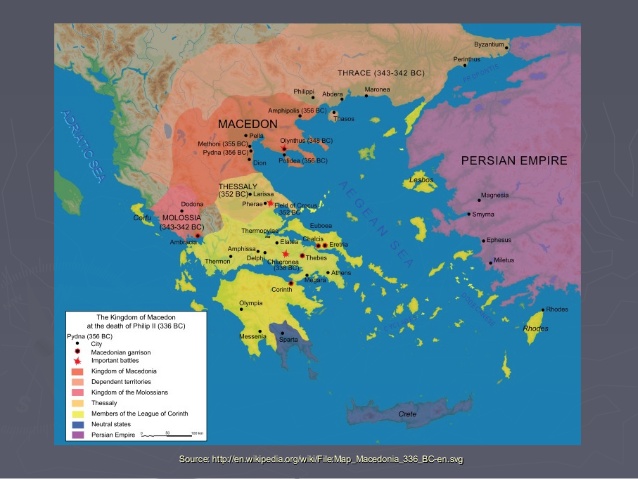 After Phillip was murdered, and Alexander took over as king of Macedonia, he warned the Greek city-states that anyone who did not join the League of Corinth and comply with the terms of the League would face his army. He meant it. He crushed Thebes. He was more gentle with Athens, but still, he conquered them by force. Building on the tricky terms his father had created in the contract, and the fear of Alexander and his army, resulted in Alexander's leadership of the ancient Greek city-states through his position as head of the League of Corinth. He never actually sent his army to conquer Sparta, but Sparta agreed to join the League to save their people from attack.

Alexander was ruthless with anyone who stood in his way - he intended to conquer the world. But Alexander admired the Greek culture. While he was out and about, conquering other civilizations in Europe, Africa, and Asia, he built trade routes and spread Greek knowledge and ideas everywhere he went.

After Alexander's death, his empire fell apart, but much of the Greek culture he spread remained, as did the international trade routes. The Greek city-states were once again independent. It would be 200 years before the Romans showed up, and conquered them again.

Quizlet Flash Cards: Alexander the Great and the League of Corinth - interactive

The Story of Alexander the Great for Kids

Was Macedonia a Greek city-state? (scroll down towards the end of this page)